Here is an introduction to the site.

Administrative information: Ancient monument 22:1, Västra Tollstad parish, province of Östergötland. The site has the following number in the new register of ancient monuments: L2009:2158. The Alvastra pile dwelling is situated at the foot of  Omberg, a hill described geologically as a bedrock horst, reaching a height of 263 m a.s.l. This forest-covered hill can be seen in the background of fig. 6. The west side of the hill slopes steeply down to Lake Vättern, the second-largest inland lake of Sweden. The north-eastern edge of Omberg comes close to the western shore of Lake Tåkern and the south-eastern edge slopes down to the mires of Dagsmose and Broby where the pile dwelling was constructed. The Broby mire is a spring mire which means that in places limestone-rich groundwater bubbles up through the layers of peat (Browall 1986:14f). 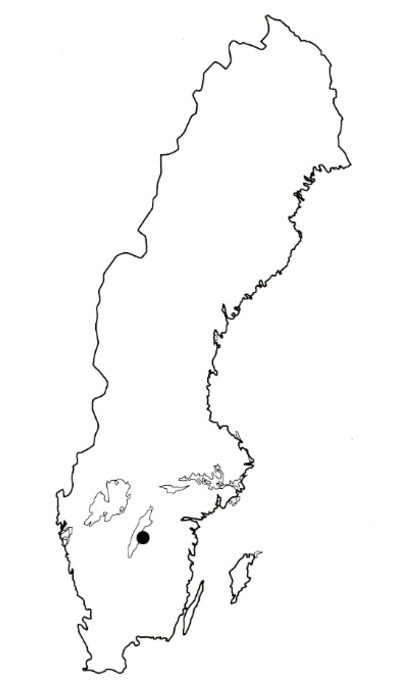 Fig. 1. The position of Alvastra on the eastern shore of Lake Vättern. After Janzon 2009:fig 1.

The Alvastra pile dwelling is a wooden platform in the middle of a mire connected to the mainland by a wooden causeway. It is the only pile dwelling in Sweden (https://historiska.se/alvastra/the-site/alvastra-in-scandinavia/).  The platform is surrounded by a fence or palisade of oak poles or piles driven into the ground.  It was built around 3000 B.C. in the Broby spring mire at Alvastra in the parish of Västra Tollstad and the province of Östergötland. The wooden platform was not an everyday dwelling, even though pile dwelling is its archaeological name. On the contrary, it was the scene of large-scale ritual activities, activities that are focused on the meeting of cultures. 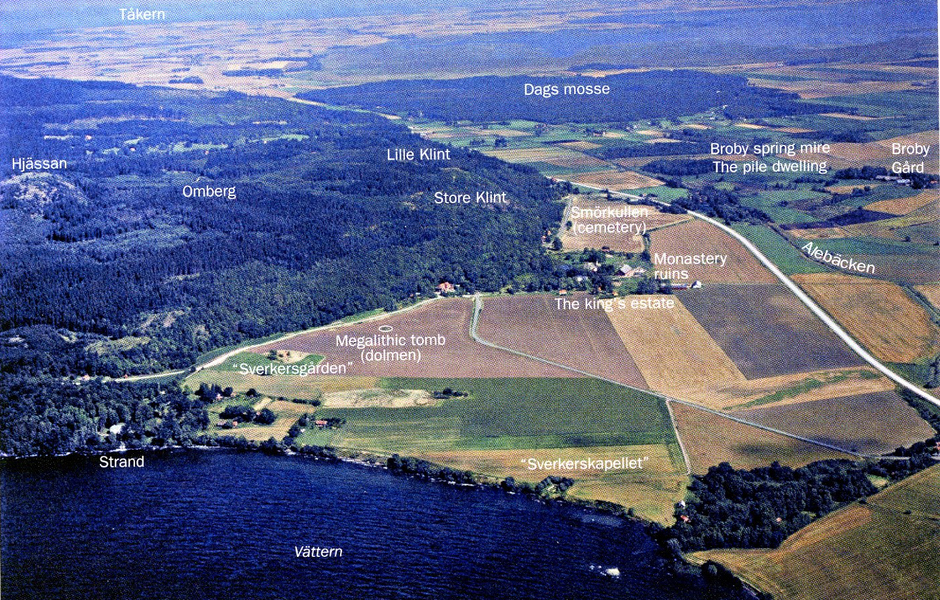 Fig. 2. The Alvastra area showing the Omberg Hill, Lake Vättern, Lake Tåkern, the spring mire of Broby in which the pile dwelling is situated. This figure also shows the position of the megalithic grave. From Janzon 2009, fig. 2 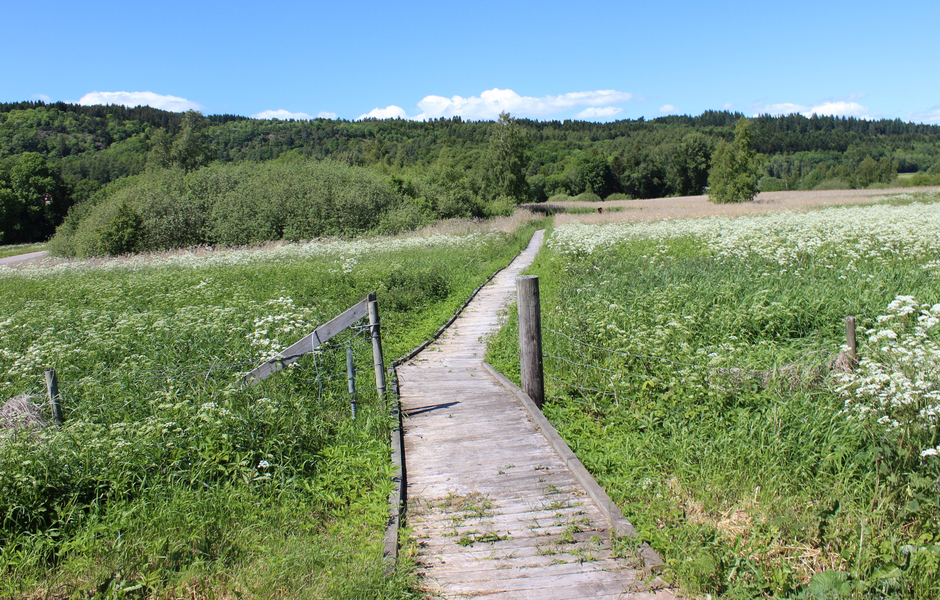 Fig. 3. The site in 2015. Line of the causeway reconstructed. Photo: Nathalie Hinders, ATA

The pile dwelling is for several reasons of great archaeological significance:

The site has not been excavated in total. According to the Register of Archaeological Sites, this site encompasses c. 9375 m² (125 x 75 m). However,  Mats P. Malmer estimated that the site comprises 1050 m² of which 260 m² was unexcavated when the early project was completed in 1930 (Malmer:362) The plan 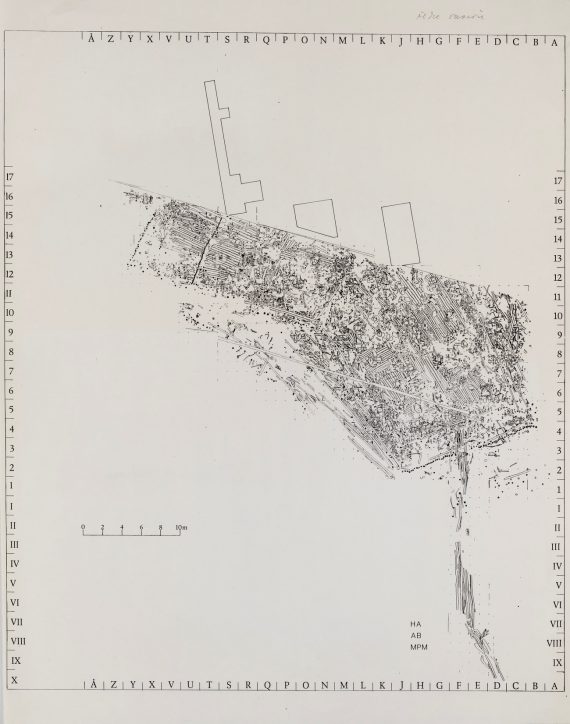 in fig. 7 shows which parts of the site have been excavated, a total of around 1195 m² (Frödin also excavated at least 18 m exploratory trench; Browall 2011:31 not shown  here). The later excavations included 95 m² (see fig. 8. This should mean that 165 m² still remain uninvestigated.

The largest trench (F for Frödin, i.e. Otto Frödin, the archaeologist who directed the excavation) was investigated between 1909 and 1930 and published in 2011 by Hans Browall.

The features excavated consisted of: (Browall 2011:85)

Browall summarized the history of the platform after a thorough analysis of the wooden and stone features documented during the excavation (Browall 2011:168-170). First a causeway or walkway was constructed from dry land to the site in the spring mire. The edges of the site were marked by rows of logs and widely spaced piles in lines. The site was divided into an eastern and western department in the same way. Within this framework, log floors and sequentially placed logs were placed directly on the natural brown peat and limestone gyttja and sometimes on smaller surfaces of brushwood. Hollows in the ground surface and springs of water were filled with surplus wood, brushwood and nutshells. The logs floors represent the primary activity area and the sequentially placed logs form a corridor of communication between the different areas of the site.  There are no traces of walls or roofs. Hearths were built on the log floors.

A large fire destroyed parts of the wooden platform. Some of the log floors were repaired after the fire but the original construction was not rebuilt as it was in the beginning. A large number of hearths were built after the fire. After some time, a new phase of rebuilding occurred. Among other things the palisade in the south-east was changed. Its opening was widened and deposits of cultural material from the wooden platform were cleared out onto the walkway.

The Western trench was situated with a view to locating the continuation of the row of piles between log floor 1 and 2 in Frödin’s trench (Browall 2011:87 ff), in order to establish a link between the older and the newer excavations. This was successful and two piles in the southern area of the Western trench were included in the plans of Frödin’s trench with height marked. This meant that the coordinate system of the two excavations could be linked (Browall 2011:384).

The Trial trench was opened in order to find the northern border of the pile dwelling and to investigate the perimeter construction in the north (Browall 2011:384). Work on the Trial trench started in 1978. A row of piles was found, probably the continuation of pile row 1 in Frödin’s trench (Browall 2011:387). The border between the Western and the Trial trench has probably been defined differently in different periods. During the excavation the square x230/y407 seems to have been regarded as belonging to Trial trench, but Hans Browall in his publication of 2016 (p. 24) has included this square in the Western trench. In the collections and in the database this square is seen as belonging to the Trial trench (119 records in the database).

The Middle trench was placed between the Eastern and the Western trenches. The original plan was to excavate the whole area between these two trenches (Browall 2011;384).

In an effort to find the western continuation of the causeway on the other side of the wooden platform the New Trial trenches were excavated (Browall 2011: 384). No traces of this causeway were found. The New trial trenches were also called Trench T and Trench U, the latter being without finds. They were excavated in 1979-1980. The excavation of the New trial trench/Trench T began by drawing a 30-meter-long line in a NNW-SSE direction (for a map see Browall 2011:fig. 378), west of Frödin’s trench.  Along this line areas of 1×2 meters were opened with a distance of 3 meters in between. These areas were not treated as individual trenches but are instead called Square I to X (Roman numerals 1-10).

After initial excavation of Square I, the trench was extended and a number of smaller squares were opened up in the vicinity of it. These squares were named Ia to Id. Exact positions can be found in fig.9. 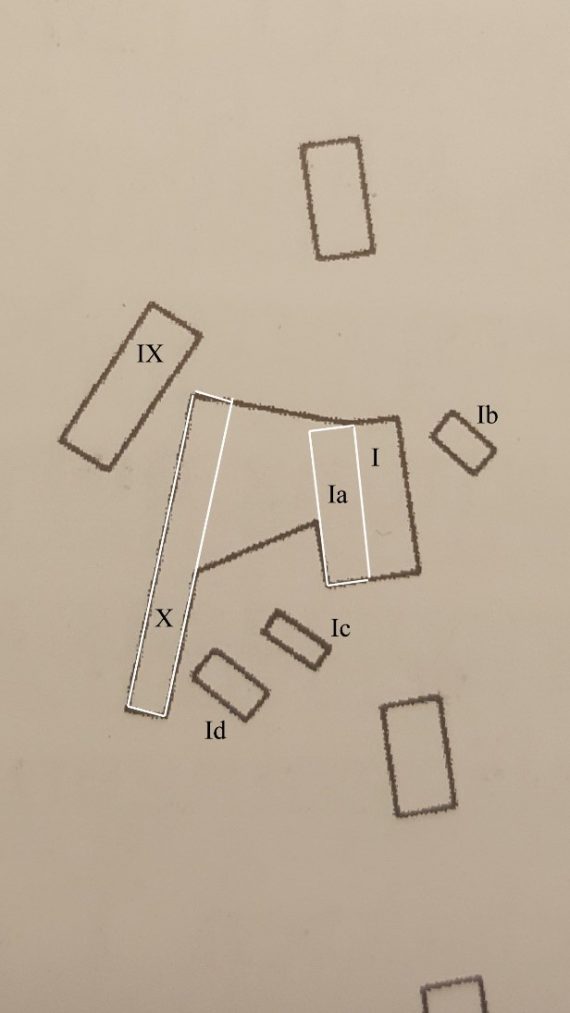 Fig. 9. Positions of trench I, IX and X as well as expansion trenches Ia-Id.

The numbers of finds recovered from these trenches were few and all material categories are reported collectively, in fig 10.

Fig. 10. All artefacts from the New Trial trench/trench T

The finds consist of an awl, a hammerstone, a knife, burnt clay, a seed, a worked bone and 15 grams of burnt clay. The finds were found in Square I and IV. The finds from this trench are few and no clear conclusions can be drawn from the assemblage. However, the finds seem to cohere with the other artefacts from Alvastra.

The documented features in the 1976-1980 excavations are described in summary in the compiled report under the heading results (Browall& Taffinder)  and by Hans Browall (2011:387ff).

In the excavation of the Western trench two log floors were uncovered. They were separated by a c. 50 cm wide space occupied by a row of tightly spaced piles. There was a fireplace on each floor of which the one in the east was excavated only partially.  A total of 43 piles was registered in the trench, measuring between 6 and 220 cm in length and 2 and 20 cm in diameter. The longest pile was driven into the ground after the construction of the floor. It was supported by a stone socket consisting of 13 stones and it seems to have been part of a heavy structure of some kind.

In the Trial trench a compact branch and twig layer was investigated together with a pile row consisting of 14 piles. A further 9 piles were found in the trench.

In the Middle trench two log floors were revealed. They were covered by a well-preserved mat of bark pieces laid criss-cross. In the space between the two floors there was a fireplace and a further fireplace was probably situated under the western edge of the trench. A total of 43 piles was found in the trench.

In the Eastern trench two log floors were investigated. Six fireplaces were documented in the trench. 117 piles were found of which some were placed in a row.

In T trench (one of the New Trial trenches) horizontal logs were encountered. They were laid in an E-W direction. Three piles stood vertically among the logs. These features could be the remains of a walkway but the connection of the logs to features in the western area of Frödin’s trench was never established as no new trenches were opened in the area between the two.

In U trench (a second New Trial trench), situated 20 m west of T trench, no horizontal timbers were documented.

Frödin’s trench was investigated in search of piles left behind after the 1909-1930 excavations. C. 600 piles were found and samples were taken for dendrochronological and wood anatomical analysis. This resulted in a floating chronology of 42 years (Bartholin 1978, 1983a, 1983b, Bartholin 1987; see further references in Browall 2011 under project literature.

The following references on this page have no web links: 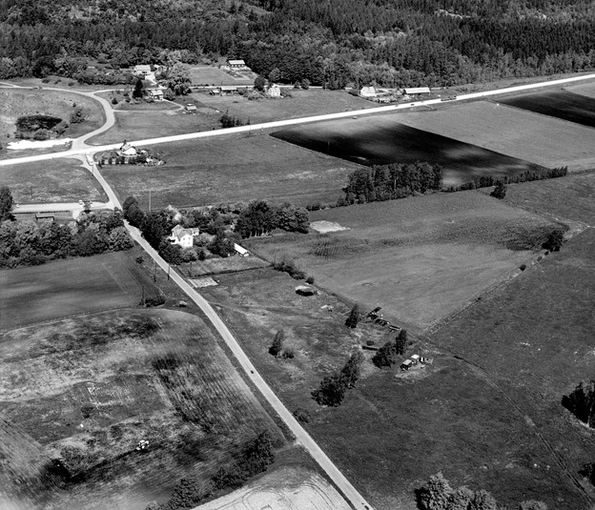 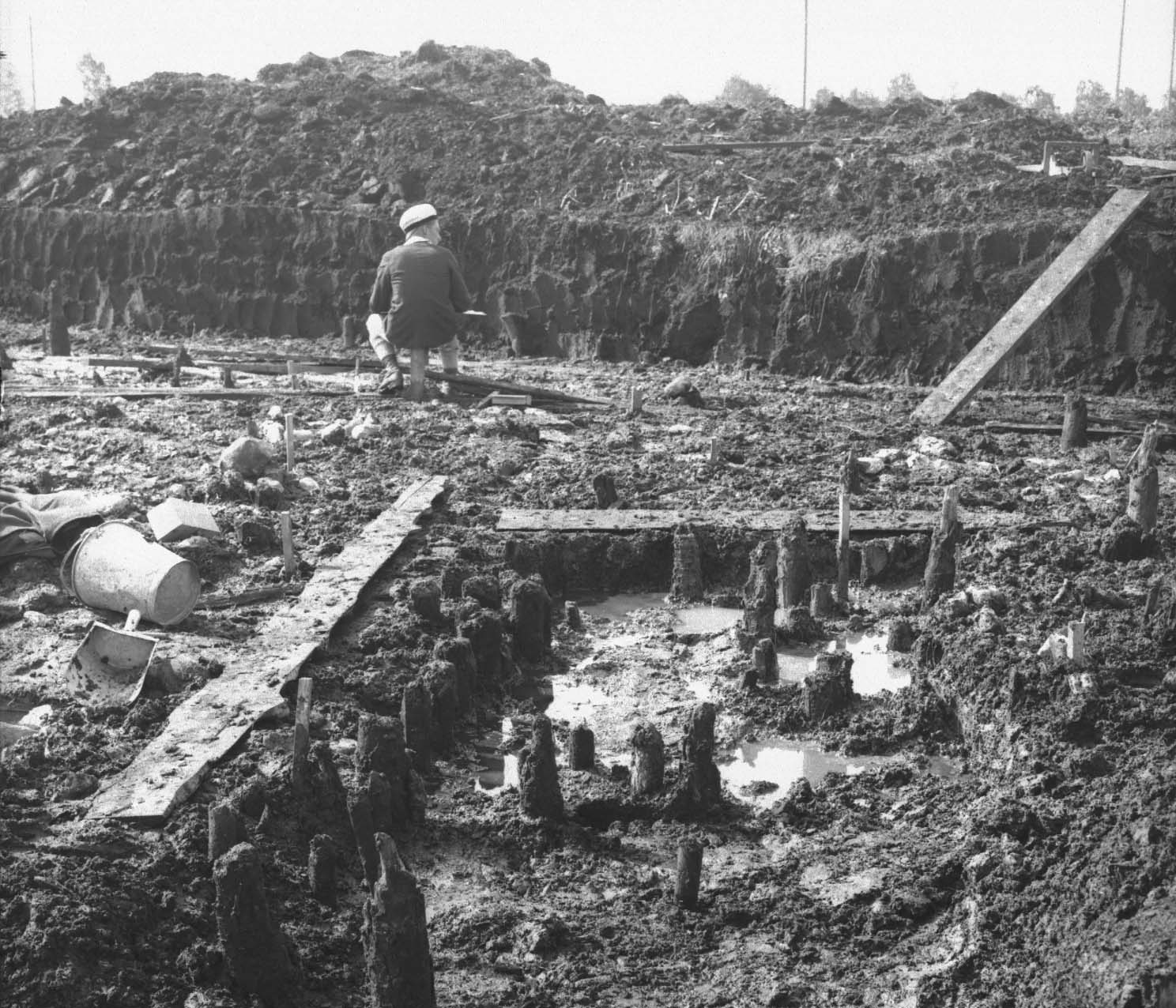 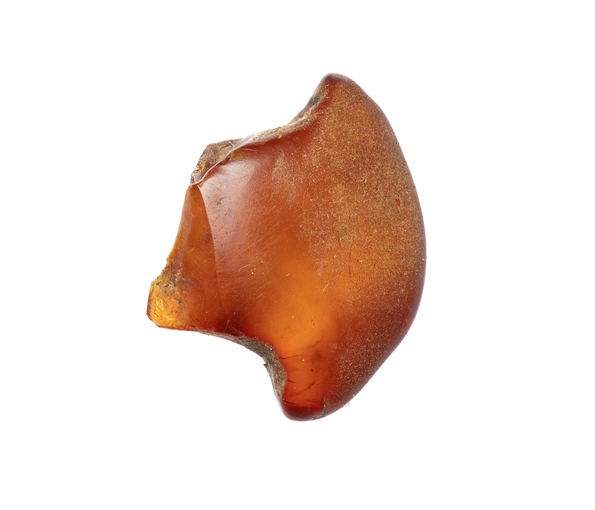 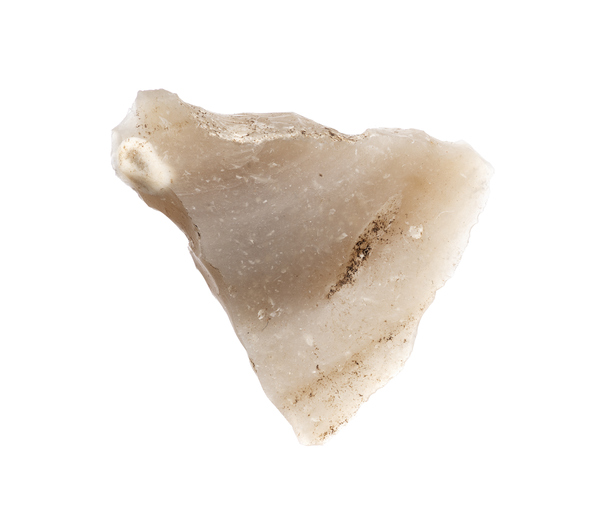 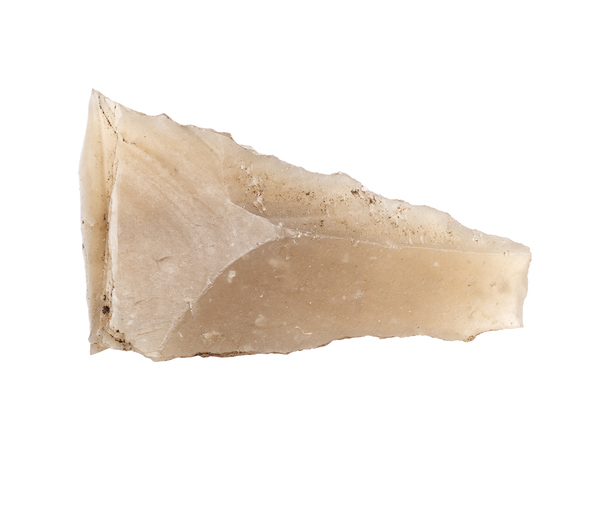 Flint from the Middle trench