The table below is an overview of the amber from these excavations in the museum database.

Three objects of amber were recovered from the excavations – two beads in the shape of a double-edged battle axe and one fragment of amber, probably a part of one of the beads. 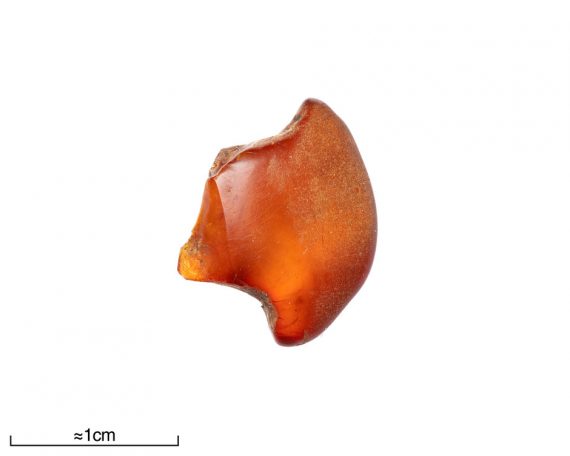 Both of the beads consist of one half of the double-edged axe, the break being across the shafthole. The patina on the break does not differ from the patina on the other surfaces of the bead, suggesting that the bead was broken before deposition. In comparison with the large amber bead of the same shape found during Frödin’s excavations (Browall 2011:293ff), both of these beads are very small, but they are of similar size to another bead of this shape found during the older excavations (Browall 2011:fig. 310:2).

It is interesting that, of the total of twelve amber pieces found at Alvastra pile dwelling, four or five are beads of double-edged axe shape and all of these are broken in half over the shafthole. The same can be said of the bone or antler bead of the same shape found during Malmer’s excavation and of the stone axes of this shape. Only the largest of these beads has secondary suspension holes drilled in the two halves. It seems reasonable to assume that this duality had some meaning for the users of the pile dwelling, (Browall 2003:60; see blog post, Duality in Dagsmosse).  This is especially likely as the breaks seem to have been effected before deposition, anyway as far as the beads are concerned.

The following references cited on this page have no web link: