Piles are defined by Browall as having a diameter from a few centimetres to around 20 cm. They usually consist of the trunk of a tree but sometimes also of a branch (Browall 2011:86). Relatively few piles were recovered during Frödin’s excavations (Malmer 1978:152). However, the length of piles that were excavated or retrieved is noted on field drawings in red. This shows that the tip of some of the piles lay 150 cm below the ground surface (Browall 2011:86). 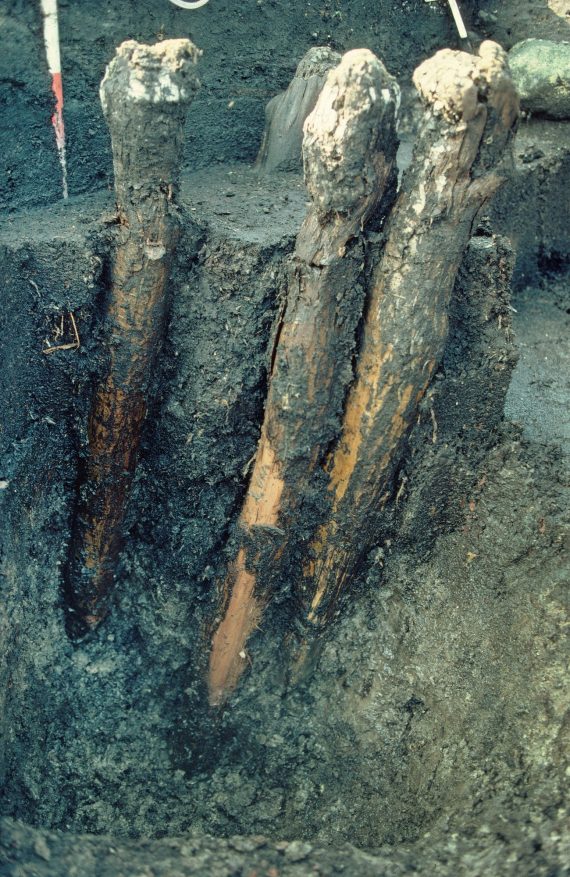 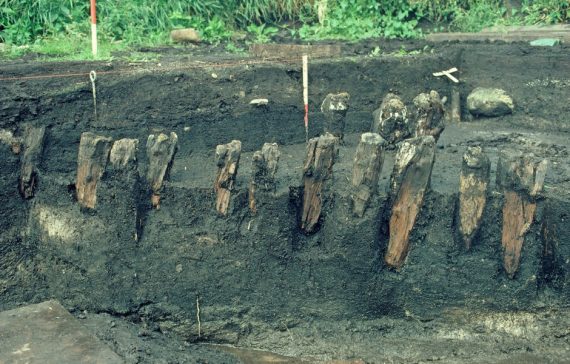 Around 200 slices of oak piles are stored at the laboratory of dendrochronology and wood anatomy in Lund.  They were sawn from the oak piles excavated during Malmer’s excavation and transported to Lund where  Thomas Bartholin was based at the time of the excavation project and these slices of oak were used by him to construct the 42-year floating chronology for the pile dwelling ( Bartholin 1978, 1983;  1987; Browall 2011:391).

Some piles, unclear how many, were until 2010 stored completely unconserved in two large tanks of water in an underground storeroom on Beckholmen, Djurgården, Stockholm. This storeroom was administered by the  Swedish National Maritime Museums.  These two tanks are mentioned in a note in the Alvastra archives, written by Mats P. Malmer, describing a visit to Beckholmen in July 1994. They are also visible on a sketch of the storeroom made in January 2010  by the Maritime Museum.

Some piles (ca. 130) were originally stored at the Technical Department of the National Heritage Board but they were transported to Beckholmen on 23 November 1982. In one of his fields diaries (november 1982) Mats P. Malmer mentions that 16 plastic boxes and one stainless steel container were moved from the technical department of the National Heritage Board to Beckholmen where they were placed next to tank 60 and 61 where the piles were stored in water.   A note signed by Stefan Bergh preserved in the Alvastra archives indicates that these containers held piles. This note includes a list of the piles transported at this point.  They are mentioned in a note in the Alvastra archives, written by Mats P. Malmer, describing a visit to Beckholmen in July 1994.

In February 1982 two piles (92 and 139) were conserved at the Wasa Museum according to notes in Mats P. Malmer’s field diary. Birgitta Håfors and Sven Bengtsson were the conservators that Mats Malmer was in contact with.  Polyethylene glycol (PEG 1500) was used in the conservation process which lasted until April 1985. Between June 1984 and April1985 the amount of polyglycol absorbed by the piles did not increase so it was thought that the conservation process had been completed. The piles were extracted from the polyethylene glycol and the process of freeze-drying began. It was to take six months. In 1988 Mats Malmer met the two conservators and at this time the piles were stored in the conservation room of the Wasa museum. Both piles had deep cracks, especially the one of elm (Pile 139; diary 20). Both piles consisted of two fragments. This room was vacated by the Marine Museum in 2008 (mail contact Susanna Allesson-Nyberg, Maritime museum, 12.10.2018). No one seems to know what happened to these two piles.

Three of the Beckholmen piles were selected in 2007 for exhibition in the Swedish History Museum’s exhibition Prehistories. They were selected because they had lost information about their archaeological context during the time from excavation. These three piles (Object number 1209187) have undergone express conservation by vacuum freeze drying for about 4,5 months, by no means an optimal conservation method (see conservation report accessible via this pile record in the database). It was realised from the beginning that time constraints would not allow the proper conservation of these piles and this is why piles with lost contexts were chosen.

Most of the piles in these water tanks were de-accessioned in 2010 when the underground storage space administered by the Swedish National Maritime Museums was closed.  This decision was taken by the Department of Archaeology and Classical Studies at Stockholm University who at this time was responsible for the material from Mats P. Malmer’s excavations.  On commission from the university, the Maritime Museums organised the destruction of the piles which was carried out by waste management services (SITA and Sakab). The piles were burnt (information provided 2018 by mail from Susanna Allesson-Nyberg, curator, Collections Unit at the Maritme Museum).  13 were selected by the Department of Archaeology at Stockholm University (Anders Carlsson, Kerstin Lidén, Lena Holmquist) for preservation. Six of these were conserved (Object numbers 1322431, 1322436, 1322438, 1322447, 1322448, 1322449).  Some piles with interesting traces of tooling were chosen and representatives of different tree species were included in the sample (oak, elm, hazel and alder according to determinations by Thomas Bartholin). These piles were conserved at the State Museum of Schleswig-Holstein, Germany. The conservator was Roland W. Amiol. Amiol’s colleague, Janosch Willers informed me by mail (20/11-2018) that the piles were conserved with polyethylene glycol and by freeze-drying between 2011 and the end of November 2013. A brief summary of the conservation process is available in the museum database and can be accessed by searching for each of the piles. It is also available here.  A further 7 piles were taken by the Unit for conservation science at the National Heritage Board to be used in research (see fig. 3. Furthermore, 10 piles have been used at the conservation agency Studio Västsvensk konservering in tuition and experimental conservation.

The de-accessioned piles were very well documented both in text and in photos.

Fig. 3. Piles preserved outside the collections of the Swedish History Museum

Conservation agency, Studio Västsvensk konservering in Göteborg (contact person Ebba Phillips), collected some 10 piles from the storerooms on Beckholmen when they were vacated in 2010. All have been used in various experiments and in tuition. No piles are preserved in Göteborg.

The preserved piles registered by the current project in the database are from the East, West and Trial trenches. In addition, nine come from Frödin’s large trench. Most of these nine were excavated from this trench during Mats P. Malmer’s excavations (Browall 2011:388f).

Fig. 4. 31 piles preserved in the collections of the Swedish History Museum

The following references cited on this page have no web links