Here we present information on the publication of the different excavations conducted at the site.

Already in 1910 the director of the earlier excavations published an article in Fornvännen on the site. This article is available here.

The older investigations have been published in Swedish by Hans Browall (2011).

The current project also carried out an indoor excavation of a peat block from Otto Frödin’s excavation which is available here (Taffinder 2016). Jonas Bergman found parasite eggs in the soil produced by this investigation and his results were published  in the Journal of Archaeological Science (Bergman 2018). Jonas also published this in the Alvastra blog.

Several report manuscripts for the Eastern trench and one for the Middle trench are available here digitally.

One of these manuscripts, report manuscript 3,  by Mats P. Malmer  was in the archives contained in a file entitled “manuscript fragment”. A note on the first page says that these pages were replaced in 1985 (presumably by pages with the same numbers in report manuscript 5. This manuscript consists of p.46-66 and two additional versions of p.48 and one more version of p. 49.

The report manuscript entitled 2 was written by Anders Carlsson (Eastern trench), the one denoted 4 by Stefan Bergh (Middle trench) and the one denoted 5 by Mats P. Malmer (later excavations general).

In 2016 Hans Browall published the results of the excavations of the Western trench (Browall 2016).

In 2016 a selection of Mats P. Malmer’s archaeological writings was edited and commented on by Stig Welinder in a volume published by the Royal Swedish Academy of Letters, History and Antiquities. This volume contained a manuscript from around 1995 on the excavations of the pile dwelling (Malmer 2016:358-376). This should be read with Stig Welinder’s comments in the same volume (Malmer 2016:293-295).  This publication will shortly be availabe online here. This manuscript is a translation of chapter 2.1 and 2.2 in the document that has been scanned for this platform. This text is a description of the findings of Otto Frödin’s excavation and a discussion of how these findings affected the later excavations at the site.

The current project has resulted in the production of an administrative report available in Swedish and English on this platform (Browall & Taffinder 2018). The purpose of this report was primarily to complete the administrative process that an excavation is according to the Cultural Environment Act. The National Heritage Board has a procedure for so-called compiled reports and this procedure has been followed.  Compiled reports are often written when excavations, for some reason or other, have not been reported after the elapse of a number of years. A find list on paper was attached to this report according to the stipulations of the National Heritage Board. This find list is not available in the scanned version presented here.

The following references on this page have no web links 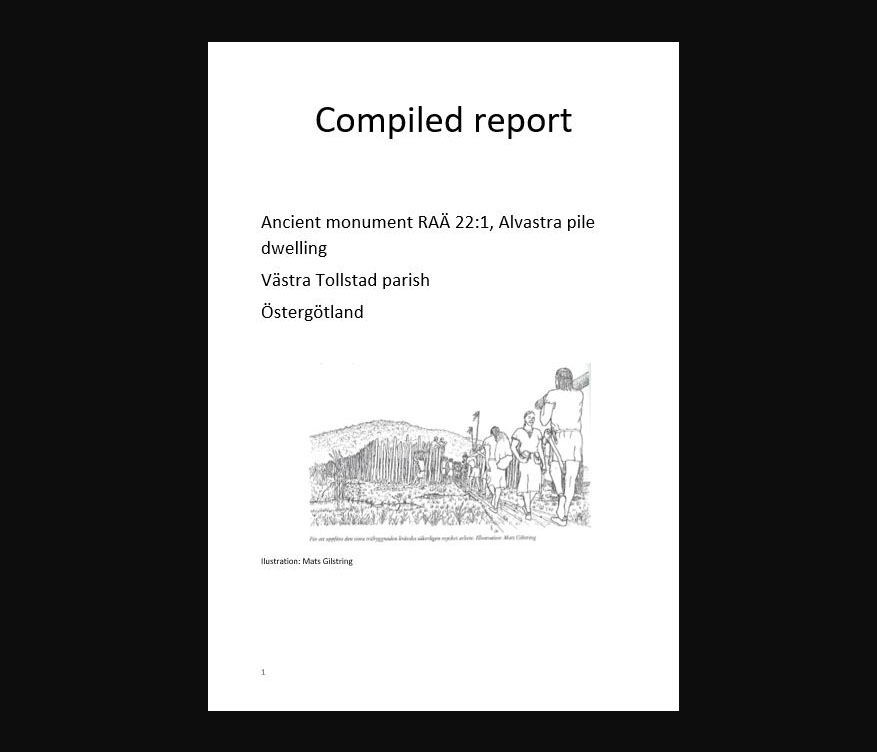