Thor the thunder-god is also the god of farmers and free people. He is temperamental, with red hair and bushy eyebrows.

Thor has three mighty objects that he uses in the fight for order and against chaos and giants: Mjölnir, the hammer that hits whatever he throws it at, Megingjord, the belt of power that doubles his strength, and a pair of iron gloves.

Thor is the son of Odin and Fjorgynn, or Jord, and is married to Sif. He is a big eater and enjoys the honey-based drink mead. As the champion of order in the world, he battles against giants and other monsters. It might be because of his power and strength that he appears in so many stories.

When Thor lost his hammer

The Thrymskvida poem from the Poetic Edda tells of how the giant Thrym stole Thor’s hammer Mjölnir and hid it deep underground. And Thor without his hammer put the gods and the whole of their world under threat!

Loki, usually so sly and treacherous, this time wanted to help and so he went to Thrym and asked him what he wanted in exchange for the hammer. Thrym asked to marry Freyja. Freyja said no and was so angry that the whole of Asgard shook.

The gods put their heads together to come up with a solution. Heimdall suggested that they should accept the giant’s condition, but that Thor should disguise himself in a wedding dress, wear Freyja’s necklace Brisingamen and go there in her place. Now it was Thor’s turn to be angry. He did not want to wear women’s clothes! But the gods managed to convince him and Loki went with him as a bridesmaid.

They arrived in Jotunheim, the realm of the giants, during a thunderstorm and joined in a huge feast with lots of food. Thrym was surprised to see “Freyja” consume an ox, eight salmon and a whole barrel of mead. Quick-thinking Loki explained that “Freyja” had been longing for the giant so much that she had not eaten for eight days.

When Thrym then tried to kiss “Freyja”, the giant recoiled from the “bride’s” terrified look. Loki quickly explained that this was because “she” had not been able to sleep for eight nights.

Then Mjölnir was retrieved from underground and placed in the lap of the “bride”, as a customary gift when getting married. But then Thor revealed himself and crushed the skulls of all the giants with his hammer. The world of the gods was saved! 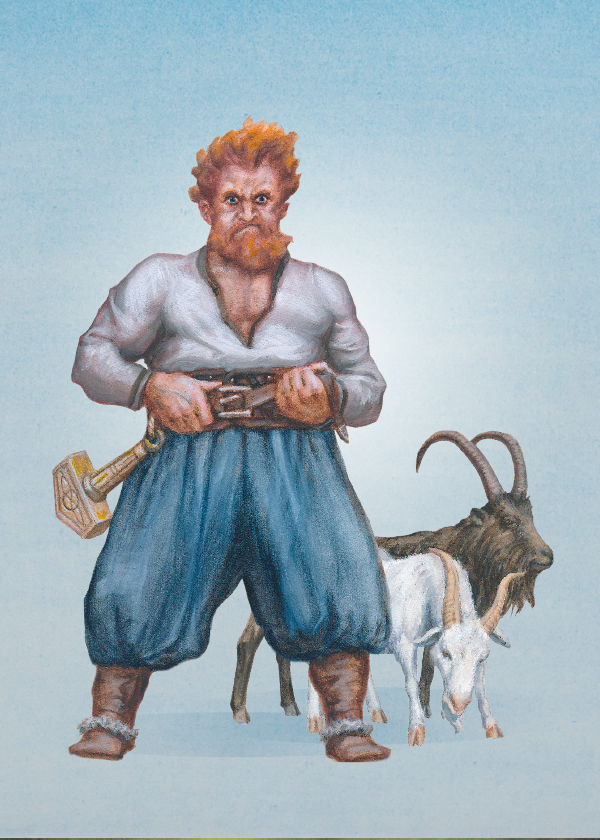 Thor is temperamental, with red hair and bushy eyebrows.