The Vikings are possibly best known as brutal robbers. Today there are many pictures and stories about the Vikings, stories that describe how they travelled around the world, frightening the life out of people. This is not the true story of the Vikings.

The exhibition stands until January 6 2019. Then we will start building a new Viking exhibition, which will open in the beginning of 2021.

The Vikings were mostly peaceful traders. However, most of the people who lived in the Nordic Countries during this period were not Vikings. They were farmers, hunters and craftsmen.

The exhibition does include weapons, but it also includes thousands of objects which give a different picture, telling the story of everyday activities, religious beliefs and family life. 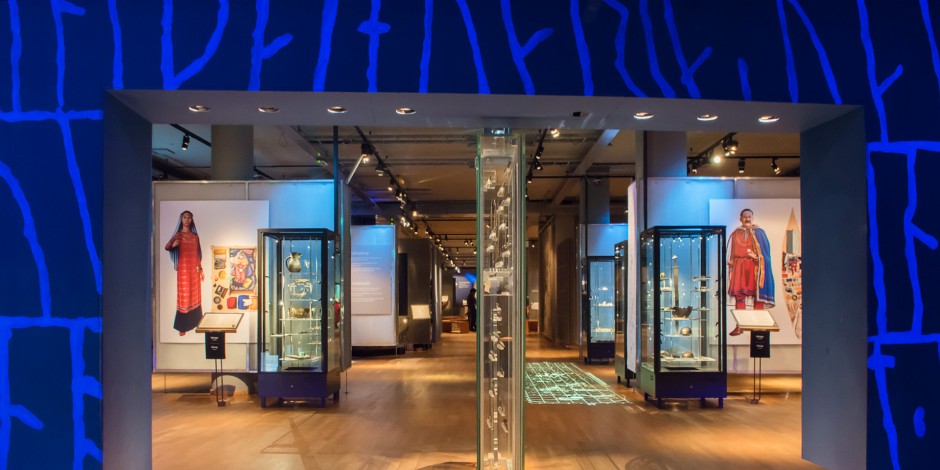 You will find the Viking exhibition on the ground floor.

Mother Unna erected a rune stone in Uppland, a powerful woman trader was buried on the island of Björkö in Lake Mälaren and a prosperous farmer from Dalarna counted his wealth in iron. You will meet them in the “Vikings” exhibition.

The years between 800 and 1050 are the bestknown period of Scandinavian prehistory, the Viking period. The tales of Viking voyages are known far and wide, as are the tales of their trading and pillaging. Nowadays the entire population in that period, both peaceful travelling trading families and colonists and the farming population, are called Vikings, though strictly speaking the term only applied to the minority who went off “on viking”. To most Scandinavians, the farming communities they lived in were the centre of things. Even so, the Viking period was a time of change, and the whole of society was fundamentally transformed by contacts with the outside world. Trade gathered speed, as witness large hoards like that found on the outskirts of Stockholm. This included jewellery and costume details from both Russia and the Moslem empire, the Caliphate. Some of the mountings came from an oriental riding coat. Those artefacts can be seen at the start of the exhibition.

The first quasi-urban communities were founded, for example, at Birka, on the island of Björkö in Lake Mälaren, or Uppåkra, on the outskirts of the town Lund. A model of Birka forms the centrepiece of this exhibition. New land was broken, both in Scandinavia and further afield. A new religion. Christianity, was introduced, and the struggle between this faith and the prehistoric Aesir religion occupied the whole period. 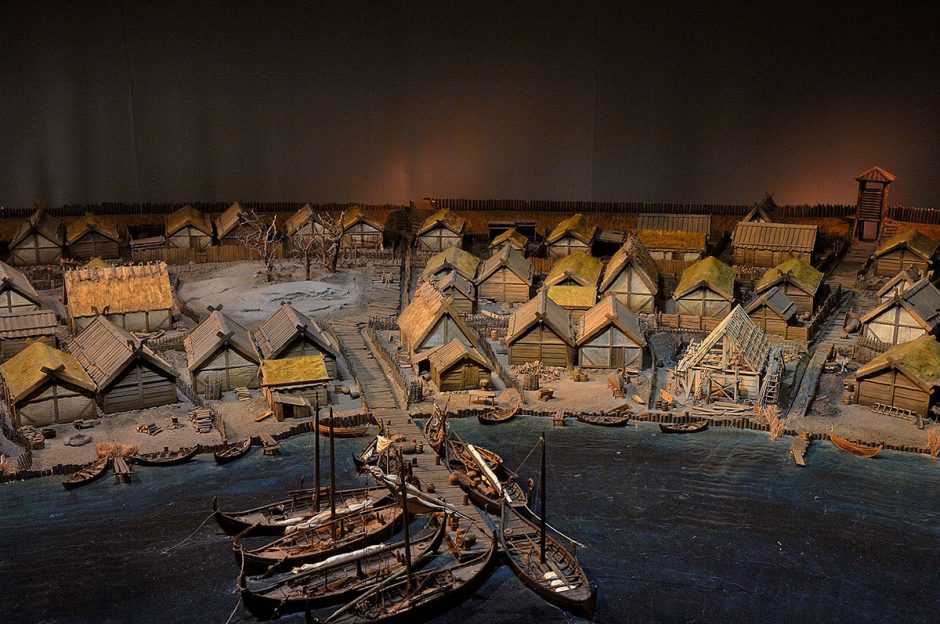 The harbour area of the Birka trading settlement may have looked like this. Model constructed by Swedish Television.

The social hierarchy of the Viking period is described in the Poetic Edda, a collection of verses and apothegms written down a few hundred years later in Iceland. Kings and jarls (earls) rank highest in it – they were the upper class of the time. It is from their world we find most artefacts. The first part of the exhibition contains finds from the graves of wealthy men and women. Here you will see grave gifts to the wealthy woman who was buried in a wooden chamber below ground on a height adjoining the Birka trading centre. She had been dressed in linen and silk which probably came from a coat. Today only tiny fragments remain. Look at her jewellery, which among other things includes beads covered in gold foil and gilt mountings shaped like horses. Near the wealthy woman, artefacts are on display from the grave of a powerful man, a ninemetre-long boat burial in Vendel, Uppland. The man had belonged to a dynasty with a centuries-old ancestry in north Uppland. The heads of the clan were buried in their ships, which would carry them to the realm of the dead. With him on board were a full set of weaponry, a cauldron and meat forks for cooking, and harness and bits for two horses.

Aristocrats, both male and female, owned exclusive gaming pieces and glass beakers, beads of carneol and rock crystal, tin-lined wine jugs, and quantities of jewellery and coins. These things came both from the Orient and from various parts of Europe, as a result of trade or, sometimes, warlike enterprises.

Many of the exhibits here were found at Birka, the trading centre on the island of Björkö in Lake Mälaren, or in the cemeteries which surround it. The finds from the Birka excavations make up a large and important part of the museum collections.

Most of the population lived by farming, hunting and fishing. Occasionally they would visit the nearest trading point to sell agricultural produce and perhaps purchase superior craft products and some exclusive luxury article. You can see traces of this in the middle of the exhibition, in the form of costume, craft products and personal belongings. Look at the many combs of horn and bone; nearly everyone in Viking times had one of these. Smart hair-dos, well-combed hair and neatly trimmed beards were important, if contemporary depictions are anything to go by. Implements for weaving textiles are on display here, as well as smoothing boards (ironing boards) and smoothing stones, used for smoothing linen garments to a fine lustre. There are regional types of jewellery on display; oval brooches were popular among the women of the Mälaren Valley. They put them on sashes to keep their strapped skirts together. On the island of Gotland, animal- and fishshaped brooches and pendants were the height of fashion. Men too had jewellery and costume ornaments, sometimes influenced by oriental fashion, as in the case of small heart-shaped belt mountings, for instance. Birka men in particular usually dressed in a manner betraying inspiration from several different cultures. Also in Saami graves similar ornaments are found e.g. in Härjedalen.

One particular human destiny is portrayed in this exhibition, namely that of a little girl from Birka who died when she was only five or six years old. Beside her grave is a reconstruction of what she probably looked like. The features are based on studies of the cranium and have been reconstructed through a combination of modern medical technology and computer processing. Child mortality was high in Viking society. Exhibits here from Birka children’s graves include small crotals (small bells) and glass beads. 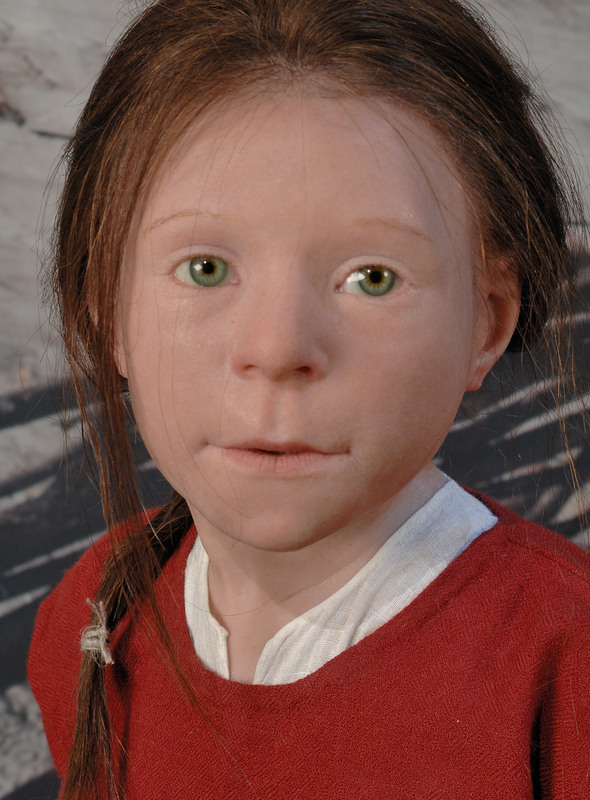 Artist Oscar Nilsson’s reconstruction of a girl buried at Birka, from 2011.

Smiths and artist-craftsmen had workshops at trading posts and on the big homesteads. One of the most unique Viking finds belonged to a man who was both smith and carpenter, namely a wooden chest containing a large collection of tools, scrap metal for recycling and finished products. It was found in a former lake, on the island of Gotland. The chest had fallen into the water there – by accident, presumably – a thousand years earlier. A strikingly large number of the tools are just like the ones used nowadays.

Iron became an increasingly important metal from the 6th century BC and throughout the rest of prehistory. It was obtainable within Sweden, partly in the form of bog ore, and it revolutionised the fabrication of both tools and weapons. A member of one of the Viking families that must have played a leading part in iron trading between north and south is buried, with an impressive array of grave gifts, in Dalarna.

Further north was the important fur trade. “Finnar” an old Norse word for the Saami people specialised in hunting. Winter hides in particular became an important commercial commodity for export further south. This exhibition includes among other things a ski and a bow from Norrbotten. See also costume ornaments belonging to a shaman.

The last part of this exhibition deals with religion and mythology. The Viking Aesir faith was populated by gods, goddesses and other mythological beings with magical qualities. The impressive picture stones from Gotland contain pictorial narratives to do with the Aesir religion. Amulets were common, especially those shaped like a hammer (emblem of the god Thor). A pendant, shown here, from Öland, is believed to represent the goddess Freya, and from a richly furnished woman’s grave in Östergötland, we have an iron staff. Staffs like this were used, the sagas tell us, by völvor (seeresses or female shamans) for prophesying the future. Saami religion at that time featured other mythological beings. Here the bird of the sacred mountains played an important part as helper to the nåjd (shaman). The unique votive find from Unna Saiva in Lappland contains amulets and pendants shaped like birds and other animals. Objects like this were worn by the population of northern Scandinavia, Finland and Russia. See also the middle part of the exhibition.

Not all artefacts with sacred associations were necessarily used as such, as witness an Irish crozier head with enamel inlay, a Coptic bronze ladle and a seated Buddha from India, all of which were found at Helgö in Uppland. It was an important trading and craft centre with traditions going back to the 3rd century. 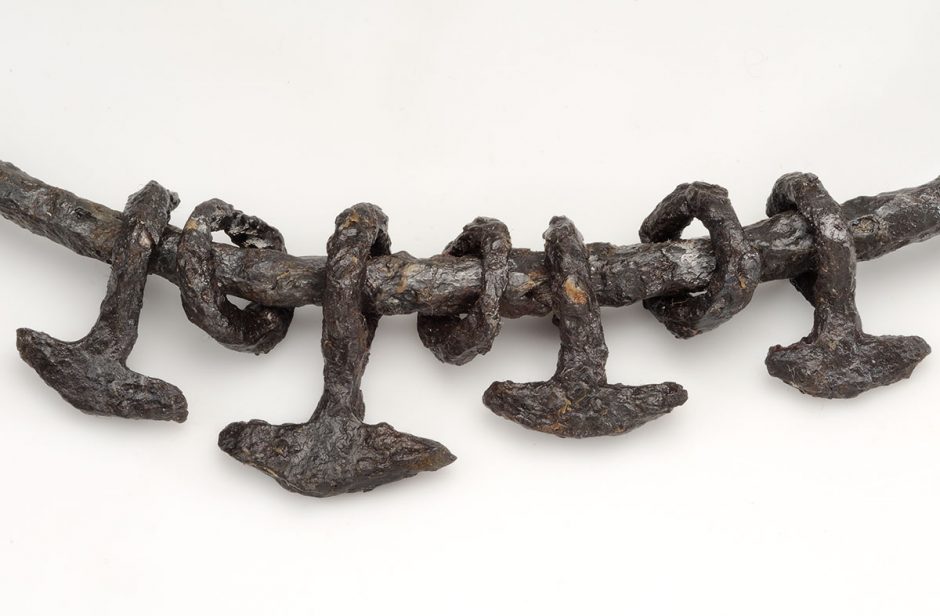 By the end of the Viking period, Christianity had taken root in central parts of Scandinavia. 11th century rune stones are inscribed with the Cross of Christ. Read the inscription commissioned by Mother Unna for the stone in memory of her dead son. The stone stands at the beginning of this exhibition.