Our collections contain a total of 52 kilos of gold and over 200 kilos of silver – much of it is on display in the Gold Room.

People have always been fascinated by gold. It has been used to create valuable jewellery and objects. At the entrance to the Gold Room there is a rune carving dating from 1040. It shows what can happen if you are too greedy for gold. Our collections contain a total of 52 kilos of gold and over 200 kilos of silver – much of it is on display in the Gold Room.

weden has one of Europe’s richest collections of prehistoric gold and silver. Nearly 3,000 gold objects are kept here. Many of them can be seen in this exhibition.

These precious things were often hidden in the ground, where they were found by servant girls and farmhands, smallholders, widows and rofters employed in agriculture and forestry. To many of them, the unexpected discovery meant an end to poverty. The state paid for the finds and they were sent to the History Museum.

See gold collars from the migration period, silver pendants from the Viking period, reliquaries decorated with gemstones from the Middle Ages and other amazing objects. Still today, goldsmiths are impressed by the skills of their predecessors.

In Sweden we have had legislation to protect antiquities since the seventeenth century. It covers finds made from gold, silver or copper alloys. If they are over 100 years old they are bought by the state. This accounts for the unusually large number of gold and silver objects which have been preserved in Sweden. 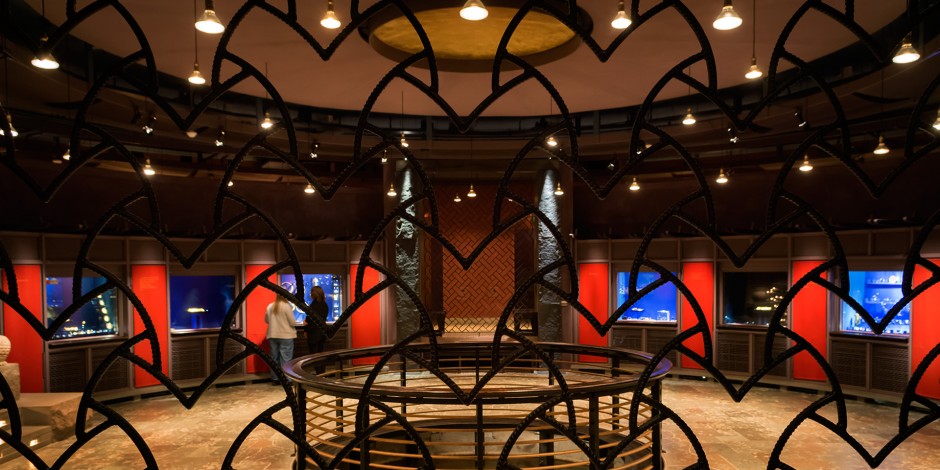 You will find the Gold Room on the lower floor.

The period between about 400 and 550 is referred to in Sweden as the Gold Age (the Migration Period), while the years from about 800 to 1050 (the Viking period) are sometimes termed the Silver Age. The differences reflect the way in which contacts with the outside world changed, and the abundance of precious metals in the parts of the world visited by the Scandinavians. Neither copper, silver nor gold was mined here in prehistoric times. Objects arriving to Scandinavia were often melted down in local workshops and turned into new things in the craftsmen’s own styles.

The oldest gold objects include spiral ornaments which, for example, Scandinavian women were winding round their tresses in about 1500 BC. Take a look at the two gold bowls from Blekinge and Halland, which were made a few centuries later, of paperthin sheet gold, and of no practical use whatsoever. Both of them, probably, were sacrificed to the gods.

Right from the beginning, gold and silver had connotations of power, riches and luxury. Rings inspired by spiral motifs and, later on, by snakes and dragons, were wound round their owners’ arms and necks from the 16th century BC onwards. Finely decorated charms like the one from Västergötland, were influenced by the art of the Black Sea region. For a number of centuries from about the beginning of the first century AD, charms were a feminine status indicator; we find them in the graves of grown women. Finger rings had a similar function for men, as with the elegant gold ring from Old Uppsala. Made somewhere in the Roman provinces, perhaps it was a reward for valour in the field. Another ring, set with garnets and almandines, carries a Greek inscription: “Eunesos, be of good cheer.” That ring was found in Södermanland.

The Roman Empire also inspired a kind of jewellery or gold pendants called bracteates. These were modelled on Roman originals, with the image of an Emperor, but with motifs from local folktale traditions added. A bracteate from the town of Trollhättan shows a mythological scene from Old Norse religion. Tyr, the god of heaven, is putting his hand in the mouth of the Fenris wolf as a token of the gods’ good intentions. But the treacherous wolf bites his hand off, and the forces of good and evil are now pitted against each other.

The exhibition also includes serpent’s head rings, inspired by Roman fashion. The name comes from the serpent heads in which collars, bracelets and rings terminated. These items were worn by both sexes.

The unique masterpieces you can see here include three gold collars, two from Västergötland and one from Öland. Made in the 5th century, they were unearthed separately in the 19th century, unaccompanied by any other finds. The collars are sometimes regarded as Sweden’s oldest regalia, but we do not know who wore them or what function they had. One theory is that they come from wooden images of gods, another that they were worn by women or men who were political or religious leaders. We can see that the collars have been used, because they show signs of wear and some of the decoration has fallen of. The collars consist of tubes bent into a ring, and they can be opened by means of an ingenious locking device. Their décor teems with soldered miniature human and animal figures, the significance of which is lost to us. Here we see stylised faces, women with plaits and loincloths, nude shield bearers, serpents and dragons, wild boar, birds, lizards, horses and fabulous beasts, all of them so small, they are barely visible to the naked eye. 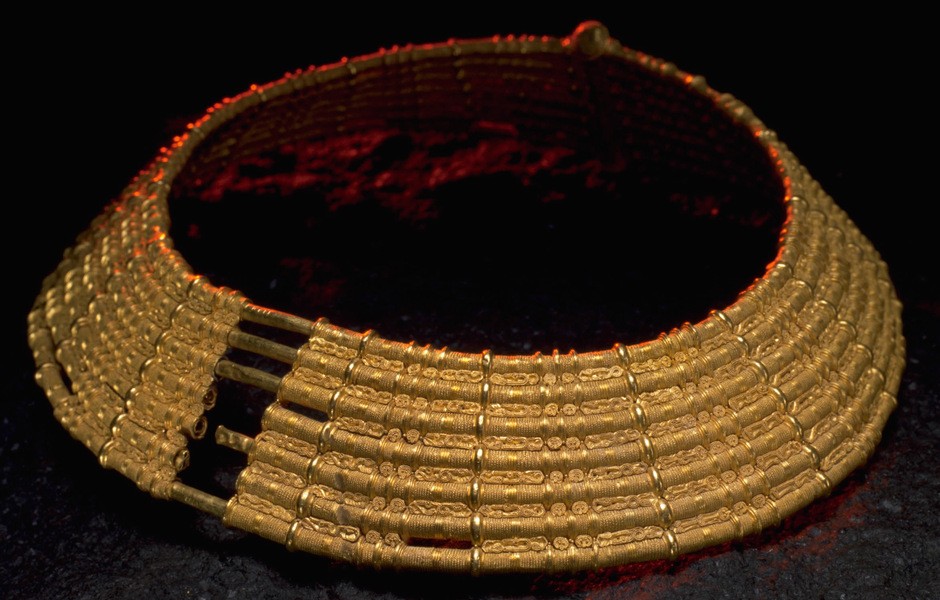 The world of myth is present in most of the exhibits from the decoration of gold bracteates to large pieces of ornamental jewellery. Small statuettes and mountings represent gods, goddesses and other mythological characters. The exhibition includes statuettes and pendants interpreted as representing the gods Odin and Frey and the goddess Freya. The mountings show images of Valkyries, the Aesir god Odin’s female helpers, e.g. in battle. But there is also one object here representing the new religion, namely the oldest native crucifix, made at Birka, the Viking trading post.

The Language of Power

Some objects clearly speak the language of power, as can be seen in the helmet from Vendel, Uppland, and in swords from the Viking period. The helmet has been decorated with thin repoussé bronze sheets, depicting scenes from Norse mythology. They were made locally. Bronze plaques used as dies for making exactly the kind of bronze sheets that decorate the helmet have been found on Öland. The helmet’s owner was a magnate belonging to a powerful dynasty in north Uppland.

Other artefacts expressing power include an ornamental sword with advanced silver inlay, found on Gotland and dated to the 9th or 10th century. Also on display are heavy silver necklaces and magnificent gilt brooches for women’s costume. These represent the peak of achievement in the decorative arts of the time. Elegantly pressed ornamentation and twisted arm rings are commonly found in women’s hoards, as are large arrangements of beads, signalling status and influence.

The coins found in Scandinavian hoards and dating from the first few centuries AD originated from the Roman Empire. Later, between about 800 and 1050, coins came instead from the Arab world, and also from Germany and England. In Scandinavia they were of no monetary significance. Instead it was the weight of metal that determined their value. Even so, people made sporadic attempts at minting their own coinage, and you can see an early example here, in the form of a coin from Birka which has been turned into a pendant. Native minting of coinage did not get seriously underway till the 12th century.

Treasures of Gold and Silver

People went on concealing hoards of silver and gold in the ground even after prehistory, especially in troubled times. One of the biggest medieval treasure troves in Europe is the Dune hoard from Gotland, which had been collected for several centuries before being hidden away. It included fine belt buckles, beakers from the east and locally made pendants. Other caches also included jewellery, pearls and drinking bowls showing Russian or Byzantine influence. Many of Gotland’s hoards were buried in about 1361, when the island was invaded by the Danes (see the exhibition “Medieval Massacre on the 1st floor).

Sami hoards were deposited at special votive sites in the northern parts of Scandinavia. They consisted of fine silver, tin and copper-alloy objects, along with animal bones and reindeer antlers. The Gold Room contains the biggest Sami treasure hoard in Sweden, from Gråträsk, on Lake Tjautjer in Norrbotten. 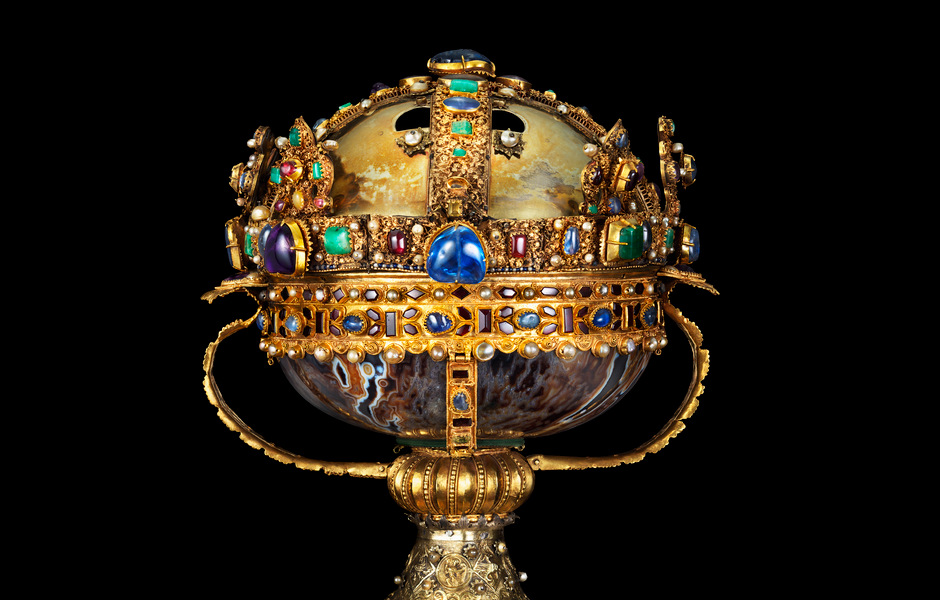 The Reliquary of St Elizabeth. Made of silver, gold, gemstones and pearls. Made up in the 1200s of several parts of varying origin.

Some of the Gold Room’s most magnificent exhibits are war booty. Communion chalices, altar crucifixes and bishops’ croziers came to Sweden from various parts of Germany during the Thirty Years War. The famous Reliquary of St Elizabeth is believed to have held the saint’s cranium. This is an exquisite specimen of European goldsmithing. It is made up of several parts of varying origin: an agate bowl from late
classical antiquity (4th -7th century), handles, edgings encrusted with pearls and gemstones dating from the 11th century, and finally, parts of two regal crowns and a foot from the 13th century. The reliquary fell into the hands of the Swedish army in 1632, when they captured the fortress of Marienberg in Würzburg 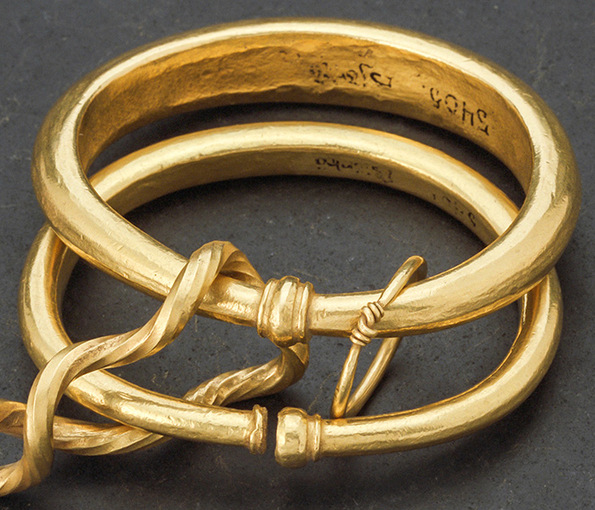