The Baroque Hall is named after the Baroque art style, which was the dominant style in the second half of the 17th century through the beginning of the 18th century. When the museum opened its doors in the 1940s, the interior was already decorated in the style of a church. Here you can see artworks from the church dating back to the 16th century and onwards.

In the Baroque Hall you will find ecclesiastical art from about 1530 to 1800. The objects represent the styles that in art history is usually called renaissance, baroque – which has given the room its name – and neoclassicism.

The room is decorated as a church hall with a large reredos on one side and a stand with an organ on the other. Here you will find a pulpit, a priest bench, funeral ornaments and a beautifully painted baptismal font, just like in a real church.

The acoustics are very good, and the Baroque Hall is also used for concerts and parties. 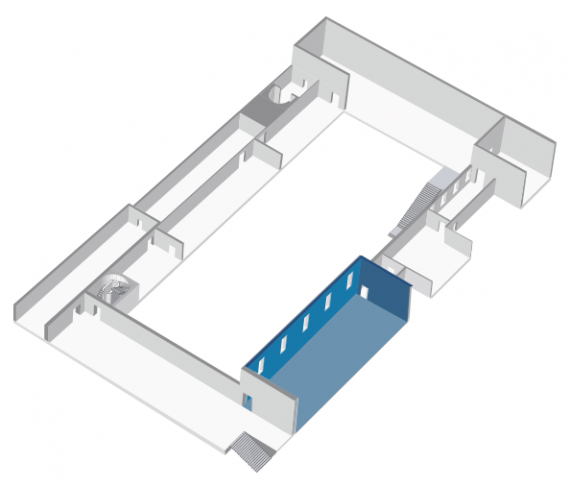 The Baroque Hall’s painted wooden ceiling is from the end of the 17th century. Originally it was in the Old Town Church in Eksjö, but was larger then. When the church was demolished in the 1880s, the congregation donated the ceiling to the National History Museum.

In the middle of the ceiling there was a monogram of the initials of Queen Hedvig Eleonora (Queen of Sweden 1654–1660). She was interested in art and architecture and a great donor of art to churches around the country.

The ceiling paintings from 1687 were painted by Jöran Künckel, born in Stockholm and working in Lübeck in the 1660s. They show scenes from the Bible according to the typological interpretation model. This can be described as saying that the Old Testament of the Bible predicted, and is linked to, the New Testament. 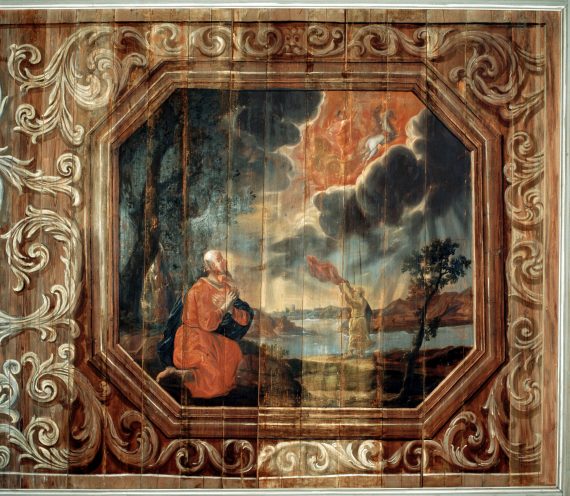 The altar from Tolfta Church in Uppland is a good example of a baroque altar from a Swedish country church. It is architecturally constructed of beams and strong columns using capitals and bases and covered with gilded, powerful, and almost overblown acanthus ornamentation. The acanthus is a leafy thistle plant from the Mediterranean that is commonly found in the Renaissance, Baroque and Neoclassical styles.

Angel heads with wings but no body, known as angelic flights, hover and strive upwards. The main motif is an oil painting of the crucifixion. On either side of the columns, Peter stands with a book and Paul with a sword and a book. Peter originally had a key in his hand that has been lost at some point. Paul’s sword reminds him that he was beheaded, Peter’s key is the one used to open the gates of the Kingdom of Heaven.

At the top there is a crown figure. It looks rather small from floor level but is actually over a meter high. It shows how the resurrected Christ, with radiant halo and his hand raised in a blessing, tramples on the devil who has adopted the shape of a dragon. The motif originated in the Bible Old Testament, in Psalm 91 Verse 13: “Over lions and snakes you go forth, you trample on beasts and dragons.” 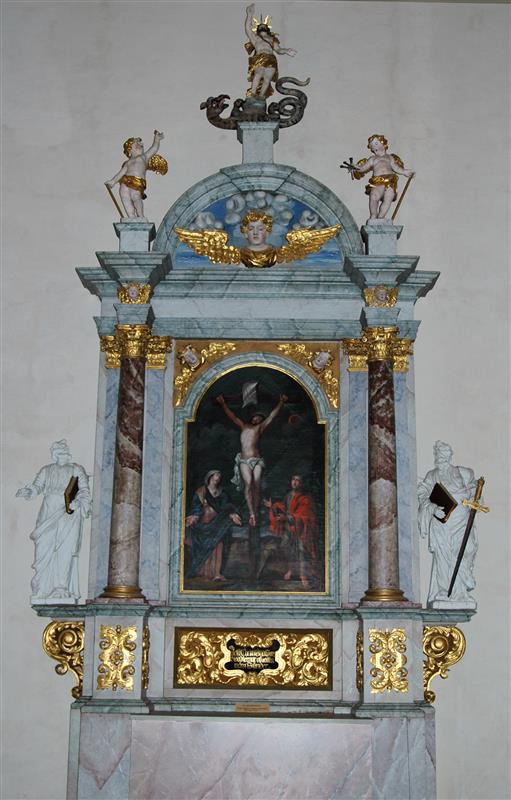 The organ housing is missing its pipes and the manual (keyboard), but the bellows are preserved inside.  Painted on the front we find the coat of arms of the Rosenstjern and Lilliehok families, and on the sides, King David, who is playing the harp, as well as a female figure playing the drum. It is possible that the woman represents Saint Cecilia, the patron saint of music. 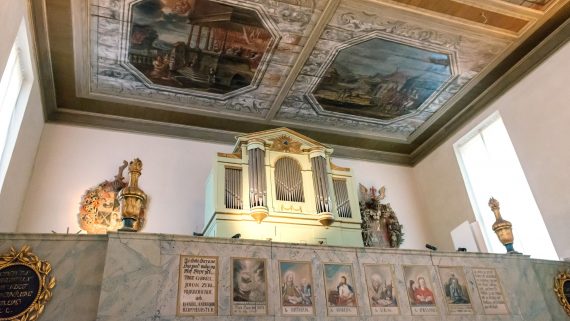