Organ music and the chimes of church bells became important in the early Christian churches. Find out more about the bells, the organs and what early organ music sounded like.

The chimes of church bells became a concrete marker of the switch from the Norse beliefs of the Vikings to Christianity. The bells, described as “God’s trumpets”, could be heard at least ten kilometers away. The first Catholic missionaries in the 9th century brought bells with them. The medieval bells in the exhibition all have exciting tales to tell.

You will find the exhibition Medieval Tones on the first floor.

It was in the Middle Ages that the sound of the organ came to Swedish churches. Two of the world’s oldest organs can be seen here. They are missing important parts such as pipes and bellows. However, the remains tell us how the early, medieval organs were built and worked. They also give us an idea of what the churches of the time might have sounded like.

Soon the church bells also took on a secular, practical function. If fire or a war broke out, they were used to raise the alarm.

You can see the casing of the organ from Sundre on Gotland. Built in 1370 by organ maker Verner of Brandenburg, it was placed in the left-hand corner up near the chancel in the church. After about hundred years, the organ became outdated and unusable. The organ casing was converted into a vestry where the priests could get changed. 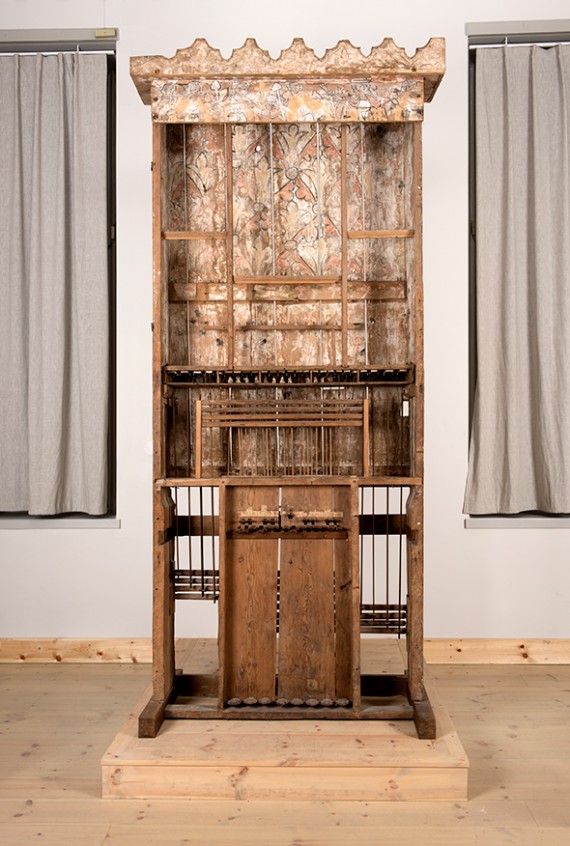 The organ from Norrlanda on Gotland is dated to the 1430’s at the latest. Photo: Katarina Nimmervoll/SHM

The organ from Norrlanda on Gotland has much of the keyboard and mechanics intact. The construction with an old arrangement of the keys indicates a date of the organ to the 1430’s at the latest.

We don´t know what music was played on the exhibited organs. It wasn’t until the late 15th century that music written specially for the organ began to appear.